COVID-19 is a serious global pandemic. The South African government has created an online resource and news portal to educate South Africans about the virus, preventative measures, symptoms and treatment. Please click here to visit the website and find out more.

What happens when I start the menopause?

Let’s get one thing straight, whatever you’re feeling and however much or little menopause research you’ve done to date, you are most certainly not alone.

Whatever your menopause story, rest assured we’re here to give you plenty of advice and support to help make your own menopause experience manageable.

So, what actually is the menopause?

As surprising or unwelcome as it might be, the menopause is a natural part of a woman’s ageing process, with its effects predominantly impacting those aged 45 to 55. Though sometimes it can be earlier, sometimes later. The menopause marks the end of the menstrual cycle, when your ovaries gradually stop producing eggs and as a result, release less oestrogen, progesterone and testosterone.

The resulting effects and symptoms of the menopause depend, to a certain extent, on a few factors; namely genetics, whether you have a healthy lifestyle, underlying medical conditions, surgery or treatments. There are 3 phases involved in the whole process:

What to expect from the menopause?

As we’ve mentioned, the menopause process occurs in phases. The pre-amble to the menopause is referred to as ‘peri-menopausal’ or ‘menopause transition’ and generally happens gradually. Periods become less frequent, with longer intervals between, until they stop altogether. For some women their periods stop suddenly.

But it’s the resulting drop in the hormones; oestrogen, progesterone and testosterone that can play havoc with you emotionally and physically, sometimes up to 10 years before you reach menopause.

Once you’ve had 12 months period free, you’ve reached menopause and would now be classed as ‘post-menopausal’. So, when people refer to ‘being menopausal’ they’re more often than not referring to the symptoms experienced in the ‘peri-menopause’ phase, but ‘being peri-menopausal’ doesn’t quite run off the tongue as nicely! 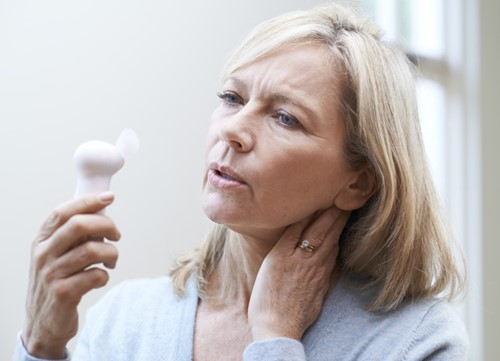 Why do I feel so different?

As your ovaries stop releasing hormones, your oestrogen and progesterone levels drop, in turn causing you all sorts of emotional and physical turbulence. If we put it into perspective, because there are oestrogen and progesterone receptors in nearly every organ and tissue in your body, it’s only natural that many parts of your body will be affected. While the changes are completely normal, the effects of the menopause are no less impactful.

Loss of oestrogen affects the brain, and can cause memory fog, anxiety, sleeplessness, social phobia, a loss in motivation and emotional upheaval as well as physical affects like lethargy, hot flushes, vaginal dryness and a resulting reduced sex drive. So, it’s safe to expect you may feel a little out of sorts while going through the motions.

Symptoms of the menopause

OK, so it’s not all fun and games but it’s completely natural to experience some of the following:

Remember, if you’re finding your symptoms hard to manage, do contact your doctor straight away, even if it just puts your mind at ease.

As your period pattern changes, you might also notice a change to the amount of blood loss when menstruating and have either a heavier or lighter flow. Many women report experiencing an extremely heavy flow while going through the menopause so it’s good to familiarise yourself with products available to you.

So, even though you might already have a preferred Lil-Lets product, now is a good time to review your choice of sanitary protection. You may want to take a look at our super plus tampons or our Maxi Night Pad as they have the highest absorbency within our range, which could be a lifesaver!

What should I use for really heavy periods?

Everyone is unique so here at Lil-Lets we have 6 absorbencies to cover every flow, even if you're really heavy. We'd recommend trying our Super Plus Extra or Ultra Non-Applicator tampons - lots of menopausal women say they're a life saver!

When will I start the menopause?

Just like starting your period, there's no definitive way of knowing when you'll start the menopause. Women are usually in their late 40's or early 50's when the transition starts but this could depend on genetics etc.

How do I prevent hot flushes?

Although there’s no magic formula for hot flushes, we do know that stress can be a trigger. It may also be an idea to cut down on your consumption of caffeine and alcohol, since they can make hot flushes worse.

Have more questions on menopause?

Got a question you’ve been too embarrassed to ask? Wondering if what you are experiencing in menopause is normal?

Join our Lil-Lets Talk community for empowering conversations for people with periods and everything inbetween.

Menopause: 7 Things You Need To Know

It’s more than just hot flushes. Read this if you want to find out more about symptoms and things you might experience

Reaching post-menopause should be a liberating experience, no more having to think about periods or even contraception. And even though you might still feel a little low, we hope you’re over the worst of those perimenopausal symptoms – what a nightmare that was!

Find out more
Lil-Lets is a trademark of Premier FMCG (Pty) Ltd. ©Copyright 2022. All Rights Reserved